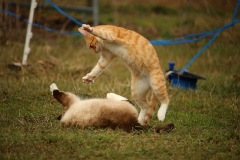 The loud and frightening cat fight has been experienced at least a couple times by every owner. The sad truth is that it’s just a natural behaviour. The way to stop it from continuing is to figure out what causes them to act out, and get their claws out. Don’t get in a fight with yourself though, because you might need to try out multiple solutions. Here are some reasons why it happens and how to stop it.

Most commonly, cats that are in a different surrounding such as a new home, young cats that are starting to get in heat or any cat that needs to adapt to another territory are more likely to break out and fight.

These acts of violence usually appear when a cat has reached social maturity, or between the ages of 2 and 4. This behaviour in males usually gets noticed when he is competing for mates, known as inter-cat aggression. The very first thing you can do to prevent the cat fights from occurring in this situation is by getting your pet spayed or neutered.

Jealousy, often caused when one cat gets more attention than the other, usually it’s the new cat. To prevent this, have some quality one on one time. This stops the feeling of fear that you love them less and provides reassurance. Depending on the breed it won’t be a problem.

Cats are territorial and because of that, new cats need to create its territory in a household and your existing cat will need to defend theirs. This leads to a cat fight. They will both have a spot considered their own, keep them away from the others. Consider getting something they can sleep in, or a cat tree and provide a towel with their scent on it and catnip as well. The “new cat smell” can cause some concern. Again, there is a towel trick. Just rub one cat with a towel and rub the same towel over the other, do this a few times a day to get them comfortable with one another.

How To Stop The Fight Before & During

Start off by getting a large dog crate or cage rather than a cat carrier. In a spare room of your house put one cat in the crate and the other outside to roam around in the room. Also, have a litter box and bed placed too. Leave them alone together, alternate them and do this for about a week. After that process and things seem to have calmed down, let them explore the room together, but keep an eye on them. Praise them and if one misbehaves, place him in the crate again. Keep this up until they can get along. After all is settled they can wonder the rest of the house. This process takes up to a month and will result in a peaceful environment.

While witnessing all these cat fights, you Probably had to step in the wresting box and break things up. One thing you should never do is reach your hand to separate the two cats, this will just hurt you. Using a squirt gun or by tossing some water on them from a distance can help. Try and make sure they aren’t aware that you’re the cause of them getting wet. Loud noises like shacking a jar of coins, air horns or banning things together such as pans will also distract them.

Not all cats fight, or at least not very often. Don’t do anything that will ruin their trust with you, such as chasing them. Patience is the best medicine. In the end, your cats will be calm and collective, until you decide to bring home another to add to the collection.