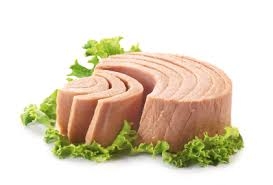 The practice of feeding our cats fish doesn't make a lot of sense, from a natural history point of view. Domestic cats evolved from desert-dwellers, and the last time I look, the deserts of the world were not abundant with fish. The African wildcat, the most likely ancestor of today's house cats, eats primarily mice, rats and rabbits with the occasional bird or reptile thrown into the mix.

Now, I'm not refuting the idea that domestic cats like fish; most of them certainly do.

However, fish isn't always the optimal food for cats. When a cat eats a diet that consists mainly of raw fish (not foods that contain fish), they are at risk for developing a thiamine deficiency. Symptoms include loss of appetite, seizures, and even death. Thiamine can be broken down by heat, but is added to cat foods after processing to ensure that it is present in reasonable amounts. It is important to know that manufacturers of canned tuna meant for human consumption do not add thiamine to their products. This means that while it is fine for a cat to eat small amounts of canned tuna as a treat every once in a while, if it makes up a large part of their diet, they too will be at risk for thiamine deficiency.

Believe it or not, fish is also responsible for a large percentage of food allergies in cats. In one study of 56 cats with identifiable food allergies, fish was a responsible allergy in 13 of those cats, which makes up 23% of those cases. This puts fish in third place for potential allergic reactions, right behind beef and dairy products.

Now that I think of it, beef and dairy aren't really 'natural' parts of a cats diet either, are they? Hmm ... maybe we're on to something here.

Now, I don't mean to imply that all cat owners should avoid feeding foods that contain fish to their cats. As long as the cat is not allergic to fish, and it is included as part of a nutritionally balanced diet, fish is a good source of protein. I just find it kind of interesting that domestic cats have developed a love for a prey that wasn't a major part of their ancestor's diets.